7 Reasons Why You Should Visit Tanzania During This Holiday Season 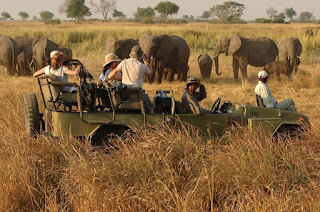 Are you craving a change of country for Christmas this year? The December holidays are almost here and it’s the perfect time to go travelling or escape the winter weather! Africa is one on the warmest place to celebrate and some destinations offer a lot closer to home than you’d expect! To help you plan your sunny Christmas holiday, Visit Tanzania this holiday!

Tanzania is Africa’s largest country sitting on a geographical area covering 945,087 km² bordered by Kenya ad Uganda in the north, Burundi and the Democratic Republic of Congo in west Zambia, Malawi and Mozambique in the south and to the east by the Indian Ocean.

Tanzania is one of the continent’s most iconic safari destinations and it is not just the Tanzania wildlife safari migration that’s great in Tanzania although it’s specifically the wild game of the Serengeti National Park and Ngorongoro Crater that draws most tourists for safaris in Tanzania. Tanzania is the best haven for Africa safari tour travellers interested in submerging themselves in the marvel of the African bush. Many visitors travel to Tanzania to see the annual Great Migration of wildebeest and zebra, but there are many other reasons to stay including the tranquil beaches of Zanzibar, to the peaks of Mount Kilimanjaro making it a country with limitless potential for Africa safari adventures.

Tanzania safaris are popular because of the diversity in wildlife species within her boundaries. Many tourists always try to find where to visit on an African safari and popular for wildlife, Tanzania is always one of the top destinations but then why would one choose to tour Tanzania or add it to their safari bucket list. Here is why you should visit Tanzania this December holiday;

Dubbed the heart of Africa, there is a profusion of wildlife within the borders of Tanzania. With 16 Tanzania safari parks, covering an area of about 42,00km2 numerous wildlife is conserved in the area. Wild animals that can be seen on a Tanzania tour are inclusive of herds of zebras, lions (the densest population in Africa), impala, buffalo herds, giraffes, elands, kudu, sable and hippos in water ponds, Antelopes, Kongoni, cheetahs, grant’s gazelle, elephants, the dramatic wildebeest and many more are spotted.

Tanzania is far beyond lions, you will be fascinated by multitudes of wildlife during your  Tanzania wildlife safaris compared to other countries like Kenya, Rwanda and Uganda. It’s a fact that Tanzania has the biggest concentration per square km of animals in the world. So, if your dream safari consists of seeing a plethora of different wild animals in their natural habitat without that enclosed feeling that’s often present when you’re on a zoo tour group, Tanzania is a great choice.

Known as one of the seven wonders in the world, the wildebeest annual migration is the best glimpse to behold on safari. The wildebeests, also called gnus, are a kind of antelopes and belong to the family Bovidae, which includes antelopes, cattle, goats, sheep and other even-toed horned ungulates. They migrate annually across Serengeti National Park in Tanzania and Masaai Mara Game Reserve in Kenya with the most dramatic moments when they cross the Mara River.

Serengeti National Park Tanzania is arguably the most famous Africa adventure safari tour destination. Serengeti Park is home to the massive wildebeest and zebra herds normally referred to as the Great Migration. The Great Migration is one of the world’s 7 natural wonders and remains the park’s biggest draw of tourists. If you are in search of the big 5 games, you will be in the right place. It is also possible to see the Big Five here including lions. As part of your adventure, you can also enjoy a Tanzania cultural safari experience among the region’s traditional Maasai tribe people.

The crater in Ngorongoro was formed when a large volcano exploded and collapsed on itself two to three million years ago. The crater is 610 meters (2,000 feet) deep with its floor covering 260 square kilometres (100 square miles) rising 1,800m above sea level. Before the collapse, the original height of the crater is estimated to have been ranging from 4,500 to 5,800 meters (14,800 to 19,000 feet) high.

Ngorongoro crater offers a classic Big 5 Tanzania wildlife tour experience. There are thousands of wildlife animals that can be seen on the crater floor for example; lions, elephants, rhinos, Thomson’s gazelles, and buffaloes. The biggest number of animals in this conservation area are the wildebeests and zebras that count to over half of the animals that call the Ngorongoro Crater home.

Tanzania is the best place to see lions…

I won’t even guess one of the animals you expect to see during your Tanzania wildlife trip, I am sure there must be a lion on your list. And if that is the case, Tanzania is the one place you really need to consider visiting. Tanzania has one of the highest lion populations compared to those you would see on a Uganda safari tour or Kenya safari. In these other Africa countries, you may only have the chance to see a handful of lions throughout the whole of your trip or not even a chance. However, during your safari in Tanzania, this is not really something you will ever have to be concerned. It is thought, according to recent figures, that there are in excess of 16,800 lions in Tanzania.

The Masaai /Masai around Serengeti National Park is a proud nomadic warrior race who count their wealth in cattle and children. The Masaai culture is rich and unique, they extend a welcome to visitors from the camps in the Park in return for support of their village, schools and health centres. The Masaai are friendly and generous hosts who will share with you their native dance, melodies, dramas and experiences. The male Masaai warriors wrap themselves in red cloth cloaks and spears as the children wear the rich bead collars.

In one of the interviews with a Maasai, he said that according to their tradition, before they were born, their grandparents had cattle which they left for their parents. And after they were born, they left the cattle to them because it is beneficial to the Maasai culture, as medicine, food, milk as well as prestige. In the course of your Tanzania safari tour, you witness the importance of their livestock. Once you step a foot in their homesteads, their love for their cattle is mirrored in the way their homestead is constructed. Their cattle are enclosed in a tree fenced enclosure in the centre of their homesteads called a boma with two entry and exit gates.

These attacks often led to revenge. The Masaai warriors normally hunted and killed lions and hyenas after an attack.

Want to learn about the history of early man, Olduvai Gorge also known as Oldupai Gorge is the best place. This site is famous as the spot where Leakey’s discovered human fossils and tools dating back to over 2 million years ago. Over 60 hominids fossil remains have been discovered in this area and most of the archaeological findings are found in the small holdup museum. The gorge is a steep-sided ravine 30 miles long that helps shed light or give a better perspective of the intelligence of the first humans.

Mount Kilimanjaro takes pride in being the highest point in Africa 5,895m (19,341ft) situated in the Kilimanjaro region northeast of the country near Moshi town. The mountain is in a protected area within Kilimanjaro National park 300km (190m) south of the equator.

Mount Kilimanjaro is a stratovolcano on the parent range of the Eastern rift mountains about three million years old with its last eruption between 150,000-200,000 years ago. Kilimanjaro mountain is the highest free-standing mountain in the world. The mountain has three (3) distinct volcanic cones which are Kibo, Mawenzi and Shira. Kibo is the highest peak at 5,895m with Uhuru peak as the highest summit on Kibo’s crater rim, Mawenzi is 5,149m (16,893ft) and Shira is 4,005m (13,140ft) with a broad plateau at 3,800m (12,500ft). Mawenzi and Shira peaks are extinct whereas Kibo is dormant and could probably erupt again, it’s the largest cone more than 15m (24km) wide. Mawenzi and Kibo are separated at 4,400m (14,400ft) by a saddle plateau.

Relax at the Zanzibar Islands…


Zanzibar Island is one of the historical islands in African history. This town was built by Arab slave-traders and spice merchants who left their mark in the form of elaborate Islamic architecture. The island’s beaches are heavenly for Africa holiday safaris; honeymoon holidays etc., while its surrounding reefs offer generous opportunities for scuba diving.

Tanzania isn’t only home to wildlife but also birdlife. The country has about a total of 1050 bird species of which 26 are endemic, 30 are accidental, and two have been introduced by humans.

Tanzania is indeed a perfect choice for a safari in Africa and alongside all of these attractions being bordered by the Indian Ocean, there a lot of recreation activities within the shores and in Zanzibar island. Many tourists also opt to tailor their safaris with the popular Uganda gorilla tours or gorilla safari Rwanda to have the best of Africa.

We Can Deliver On Projects